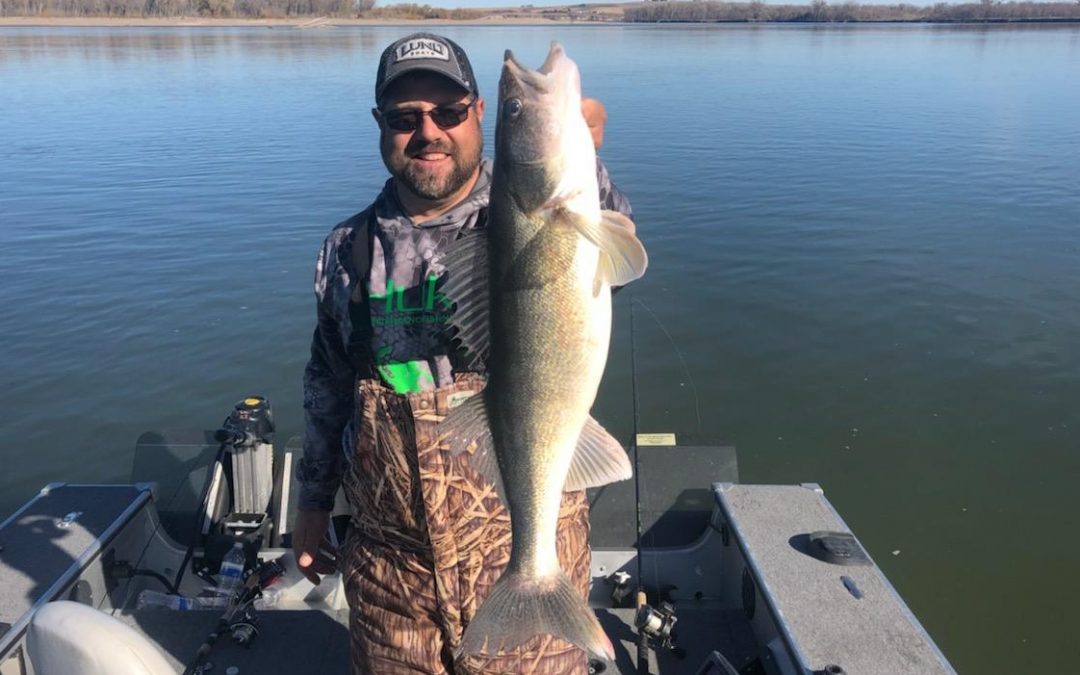 Bismarck, ND is known for being the state capital of North Dakota. Did you also know it’s home of the new North Dakota state walleye record?

Yes, the elusive walleye record that stood tall for over 5 decades finally came crashing down right in the city limits of Bismarck in the spring of 2018. Amazingly though, people came close to breaking this record numerous times last spring. It was staggering for awhile how many fish over 13 pounds were being caught. I personally anticipate it being broken again very soon especially from what we saw last spring.

How to Read the River for Hazards and Hot Spots

What makes the upper river portion of Lake Oahe so interesting year after year? It changes constantly! As soon as you think you have it figured out the water drops an inch or rises an inch and it changes everything.

Unlike a natural lake, the Missouri River seldom has two days in a row where things remain exactly the same. This can at times create navigational issues for folks who are not used to reading this body of water. You need to be able to distinguish between shallow and deeper water, logs and rocks can sometimes be mistaken for boiling currents.

It’s not uncommon in the spring of the year to hear the sounds of what is eerily similar to a monster truck or jet engines taking off. Unfortunately, these are sounds of folks that are high and dry on a sandbar somewhere, just trying to free themselves. You can always tell a river rat by the lack of paint on the props and the lower units. I also say, if you ain’t rubbing you ain’t fishing, a different version of Nascar. 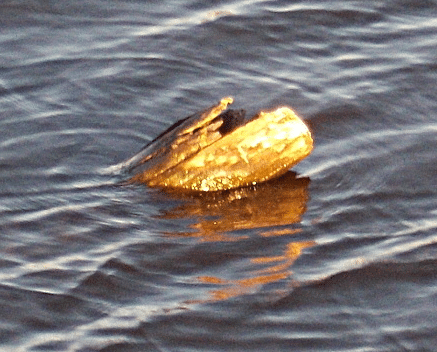 So what should one look for when trying to navigate the Mighty Mo? A telltale V in the water is usually a log or a rock. There are many sections of this body of water where it’s almost impossible not to bump into something while idling around. The sandbars can create lines in the water where the shallow can almost look like glass, and the deep has some darker colored water with a ripple to it. It is a right of passage to throttle down and trim it up on this river and rock over the top of some of these sandbars at 60 plus mph in water as shallow as 2 feet. Talk about an adrenaline rush! A person actually breathes a sigh of relief if he or she bumps a little sand. The damage is usually only a little paint, a little roughness on the prop, and maybe a water pump if this becomes a habit.

This isn’t something that should detour you from giving this body of water a try, especially after our ice out which usually occurs right around the end of March.

Personally, I will have a boat in the water as soon as a boat ramp is pushed free of ice.  You’ll find me most years waiting in the parking lot as the front end loader is doing work.

How to Fish River Walleyes

One of the obstacles we do deal with from time to time is the runoff in the spring. This river was nicknamed the Big Muddy for a reason and when the tributaries break free of ice, it can bring in a lot of mud and silt. The fish are here, but for some reason, they can be difficult to catch with this dirty water. Once the visibility gets back to about 8 inches or as soon as you can see your prop in the water, these migrating sand lizards are here willing and waiting.

My personal favorite time of the year to fish the Missouri River system is in April into May. Every pitch of a jig can result in a monster walleye. I couldn’t even try and give you a number of the number of walleyes I have caught over 8 pounds in my lifetime on this system. I don’t consider myself old by any means, but I have piled up the time here to over 40 years.

The go-to tactic on this river is nothing more than a jig tipped with a minnow or a plastic. Whites and pinks have always been my favorite colors.

Funny to think that most of my fishing during my guide season consists of using braided line, but not on this river while pitching jigs. A high vis mono 6lb test does something magical in the current. I feel it falls more subtlety and presents itself better to these sunbathing walleyes up on the sand.

When the ice comes off of course the water is cold, but get a little sun on those sandbars and these walleyes are not afraid to snuggle up shallow. When I say shallow you will find fish in less than a foot of water if conditions are right. I’m not sure if there is anything better in fishing than when you flip a jig up on a sandbar and a big old bucket mouth female inhales your jig like it’s her last supper. It’s a feeling like no other in the world of walleye fishing.

Another great way to catch these early spring walleyes is long lining shallow running crankbaits. The only problem you run into while trying to fish this way is other boats. There is kind of a general rule of thumb, if guys are pulling cranks hop in line. If guys are jigging a section you better follow suit because trying to do one or the other while others are there is going to result in some heated glares. Not to worry though, you can usually find areas to fish how you like to fish. 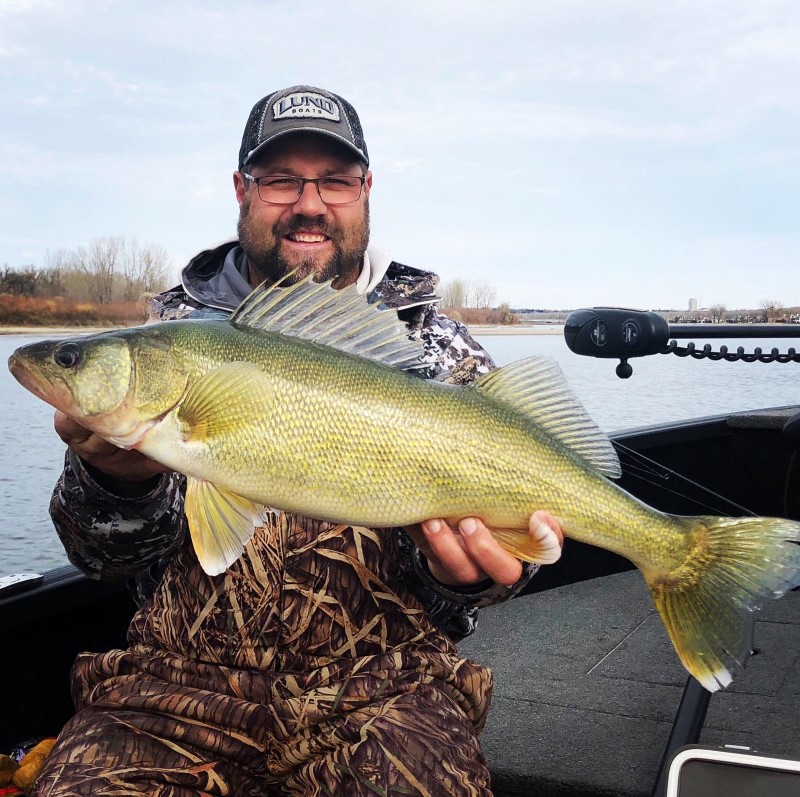 When & Where to Find the BIG WALLEYES

Right when the ice goes out, look for these bigger walleyes, in general, to be concentrated in the deep wintering holes. They seem to stack up in those areas over the winter. You can usually get a few really good days in at ice out.

Once a lot of those wintering fish are caught we need the spring spawning run to begin. Once these walleyes put their track shoes on, these fish can travel long distances up from the lower lake end of Oahe to spawn. Tagging efforts between the South Dakota and North Dakota Game and Fish have documented fish that have migrated over 100 miles in very short periods of time.

As soon as these migrators are here is usually when you start finding these fish up shallow. The shallow walleyes pretty much are abundant until late June.  That’s when the fish start to seek out cooler water either back down on Oahe or all the way up towards the Garrison Dam Tailrace section. The Tailrace is a whole other article to write about but let’s just say it’s a hidden gem in the world of fishing.

What to expect if you decide to come fish the Missouri River?

If you booked a trip with me your going to get a full day of learning and having fun while catching fish and taking in all the sights and sounds.

I never promise limits or wall hanging walleyes. I do promise however a great experience and pretty good percentages of doing all of the above. Most days on the water, especially early in the spring is quality not quantity. You do have a crack at a personal best walleye every pitch of the jig or troll of a crankbait.

The Missouri River is a totally different experience for those who have ever fished the Rainy River or the Mississippi River. I’ve fished them both and I have to say they are completely different. Remember here in North Dakota, we don’t ever have a closed period and we do not have slot limits. This gives us an edge over the others.

If you want to keep fish to eat you can or if you want a fish for the wall you can do this also. You’re not limited by any means! Another huge bonus to coming out to Bismarck to fish is we have lots of other great things to do. Great places to stay, eat and explore and if your wife or girlfriend doesn’t like to fish or they are worried about what to do.  We have a great mall and stores scattered throughout the Bismarck/Mandan area as well. If you’re a history buff we have lots of that with the Heritage Center and Lewis and Clark sites plentiful. Give the Missouri River and Bismarck, ND a look this spring! You won’t be disappointed!

EDITOR’S NOTE: Mike Peluso is a long-time resident of Bismarck and one heck of a walleye fishing guide in the area.  Check him out at Mike Peluso Outdoors to book a trip in the spring.  Like Mike stated, April and May can be insane walleye fishing.

Setting Up a Humminbird Helix for Ice Fishing

Sleeper Ice House Must Haves for Any Ice Fishing Trip

5 Must Have FREE Apps on your Phone for Ice Fishing

What Makes a Good Ice Fishing Lure for Walleyes?