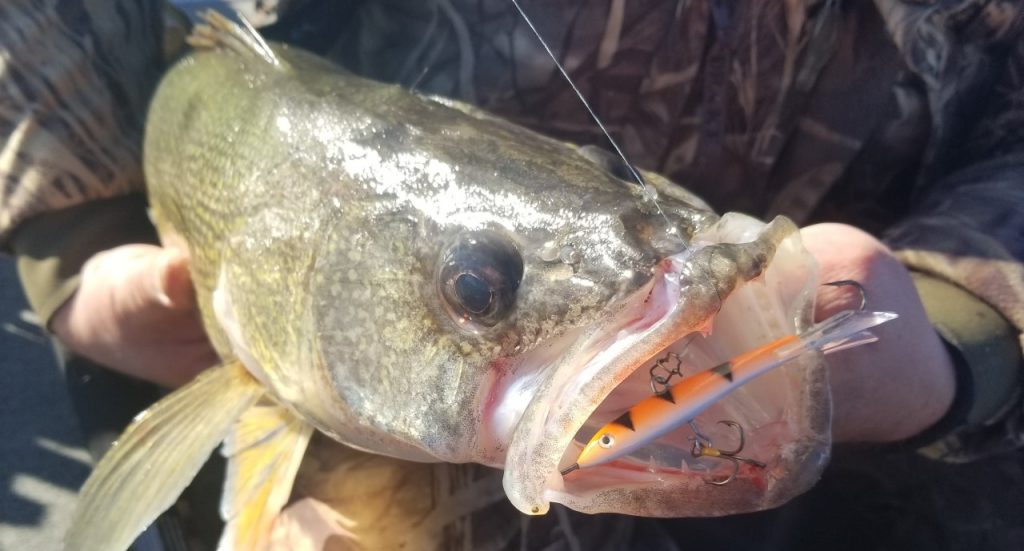 Oh no, another article on jigging raps right? Wrong. I’m not going to talk about how great they are, just how to use them effectively.  At this point, you’re already interested and possibly convinced they work for catching walleyes (and they do)…

I kind of fought the jigging rap craze in the beginning. To me, it wasn’t an exciting way to fish.  And it takes a while to get a good technique down (as well as not losing fish).  I get more satisfaction from the thump on a jig. But when you’re jigging and baiting a spot, and someone shows up with jigging raps…there’s a good chance you’re about to watch a clinic.

Not only do jigging raps work, but they can be fished in a ton of different ways. All I can say is, if you’re not using them, you’re missing out on a deadly walleye fishing tactic.

The first I heard of jigging raps was through ice fishing circles. My uncle, in fact, was the first one I saw using one. While I was used to more “natural” techniques, he was just sitting there ripping the heck out of it and catching walleyes.

Rapala, of course, was the innovator in the jigging rap. Nowadays, there are dozens of lure manufacturers with their own spin on this great fishing lure.  They all are very similar in the way you fish them, and each has a few features that separate them from the rest.

How to Rig a Jigging Rap

The mainline is entirely up to you. You’ll have the mono guys, the braid, etc. I personally use Fireline for my mainline (10 lb. test). This is just my personal preference as you often have limited areas for hooksets when fishing jigging raps. I wrote about various walleye fishing lines in another article, so we’ll keep that argument there.

I like to tie up to a barrel swivel (small), and about 18-24” of Fluorocarbon. I usually use 8-10 lb. test for the leader. I also always tie straight to the lure. I’ve found that swivels tend to snag up with the treble hook when ripping.

That’s it, now you’re ready to fish jigging raps in the majority of situations.

How to Fish Jigging Raps

There are essentially 2 ways that I fish jigging raps:

Vertical Jigging – This is the most simple way to fish them. First, find the bottom. After that, start “ripping” with your wrist. One rip, and it glides back down. Often many guys will do a double rip, giving it more action and a further fall. Mix it up, find the technique that works best for you. Keep in mind, they will almost ALWAYS hit it on the fall, or they will pin it to the ground. Always be prepared to set the hook when you rip each time.  You’ll be surprised how many walleyes you will catch that you won’t feel the bite.

Casting Jig Raps – If you want to cover ground, this is the most effective way. Cast the jigging rap out but not too far. I tend to get better hooksets closer to the boat. From there it’s all in the wrist. Work the bait, depending on whether you want it hitting bottom or not. Just judge the fall, you’ll feel bottom. You can rip 1-4 times, depending on how deep, or if you’re going up structure, then let it fall. As stated earlier, always be ready to set the hook.

What’s amazing about fishing jigging raps, is how I’m hearing more ways that they’re being used.  Some guys RIP THEM through weeds without the worry of snags.  After all, when you’re ripping that hard it’s hard for weeds to stay on.  I’ve also heard of them trolled through trees like walleye spinnerbaits.  Sounds crazy, I know, but hey too each their own.

Okay, so I’m not saying we troll these baits in a traditional sense. With traditional walleye trolling, you’re long-lining lures at a certain speed. But not with jigging raps.

What we do is troll around points and humps, and look for big arcs on the graph. Then we quickly stop and drop our lines down. If you’re near a transducer, you can fish it like a traditional ice fishing sonar. You’ll see the walleye make a play on your lure. It’s simply awesome.  Using spot lock on your trolling motor really helps in these situations as well.

This “spot and stalk” method not only works, but it’s a great way to seek out BIG walleyes that are roaming around a certain structure. It takes some patience but it can pay off big dividends.  I’m seeing this tactic more and more in tournaments, and I’m seeing some nice bags as a result.

Out of the box, the Rapala Jigging Rap is a decent lure. It catches fish, obviously, as is. However, if you fish them a lot then you know you lose a lot of fish. It really depends on the fish’s mood. I tend to either hook them in the mouth (when aggressive) or on the bottom of the mouth (when they pin it to the bottom). Either way, you do get a lot of weird hooksets that can result in losing the fish. So what do you do?

Well first, you need to do something with the bottom treble hook. There are really 2 options I recommend:

If fishing in snaggy areas, you really need to keep it off the bottom as much as possible. But when that isn’t possible, consider clipping off the front hook. More often than not, this is the hook that gets you in trouble. I personally don’t do this, but I’ve heard this from a lot of respectable anglers.

What Size to Use for Walleye?

The fishing lure itself is quite simple. They range in size from ⅛ oz all the way up to ⅞ oz (Model 9). If we’re going to be talking about jigging raps for walleye, I only use model 7s or 9s. And if I could only fish one, it’d be the model 9. I just like how it gets down FAST and stays near the bottom when moving.

What Fishing Rod Should I Use?

The concept for ice fishing is really the same as vertical jigging in open water. It’s an aggressive bait, so you’ll always want to fish it aggressively. Depending on how deep you are in the water, depends on how high you’ll want to rip.

Also, the rigging is about the same, we just may size down a bit on lure selection on the fishing line. But we will use a ball bearing swivel that ties the mainline to 18” of a leader.

So that’s fishing jigging raps for walleye in a nutshell. I’m still learning more about how to use this bait all the time. You’ll find that it’ll have a place in your arsenal real soon if you’re reading this…otherwise you’re missing out!