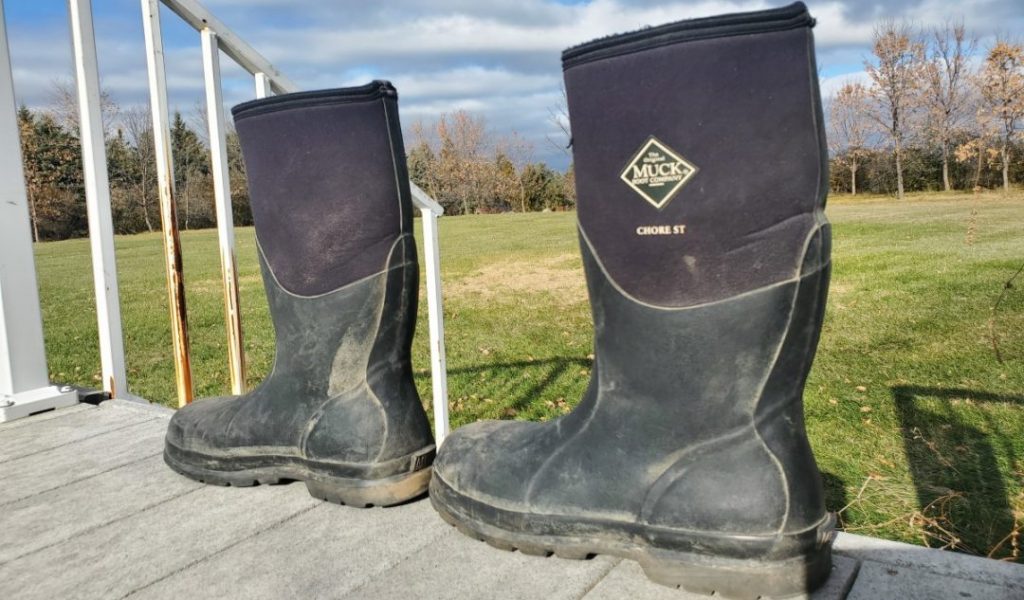 My first pair of Muck Boots were the Wetlands model. In fact, as I’ve stated earlier; I’ve had 2 pairs. My feet don’t get too cold by nature, I live and hunt in Canada and the Dakotas and these have done the job for warmth when I’m just wearing a standard pair of white cotton socks. I’ve found that if you wear wool socks, they start to sweat and that’s when your feet get cold (when you stop moving in the cold).

I’m an avid hunter, waterfowl mostly, and I hunt out of blinds a lot. When I’m moving around, no problem, but when your feet start to sweat that’s when your feet can get cold.

I do like that they are waterproof up to the top of the boots, and are very easy to get on and off. But the fact they don’t breath well makes them get stinky in a hurry. I’ve found it’s best to roll the top down (with all Muck Boots, actually) and this makes them easier to dry out. If you’re looking for something quicker, I highly recommend getting a pair of boot dryers with any pair of Muck boots, not just the Wetlands version.

Now, the cons. Over time, the boots will start to crack and this allows water in (losing waterproofing). While I thought this was just a problem with one pair, it happened with both pairs. This didn’t happen right away, but they did crack on the first pair after around 18 months and the 2nd pair at about 2 years. Not only do I wear them hunting, but ice fishing as well. So they do get A LOT of use (I’m an avid outdoorsman). Once they crack, they’re toast. I literally toss them at that point, as I’m in wet conditions a lot and don’t have time to get my feet soaked in cold weather.

Also, the tops are susceptible to tearing if you come across any sticks or barb wire, for example. Again, when this happens, they’re done.  I’ve tried to repair them unsuccessfully in the past.

After my first 2 pairs of Wetlands, I gave the Muck Boots Arctic Pros a shot. The first thing I noticed, is that they are warmer than the Wetlands version. This was fine with me, but I did notice my feet sweating more (and stinkier boots).

As all pairs of Muck boots, they were very comfortable. I felt they fit my feet just a bit better than the others I’ve worn.

When I’m on the ice all day ice fishing, I did like this pair of boots better. That extra warmth kept my feet that much warmer, and I appreciated that. But over about 2 years, I started getting cracking in these like the Wetlands.

So while MOST people will get probably 3-5 years out of them, for someone who uses these boots a lot, 2 years is about all you’ll get out of them. This is a bit disappointing to me, considering the cost of these boots.

If you’re looking to give Muck Boots a try, you may want to look into the Chore St boots. They are a bit cheaper than the Wetlands or Arctic Pros, and I’m assuming this is because they don’t have the warmth or construction as the other two.

They slip on and off easy as well, but they do have their issues like the others. About 2 months in, they got a tear towards the top of the boot. When I brought them in, they couldn’t be replaced. So keep this in mind if you’re looking for an expensive pair of boots without a warranty.

But they do have all the same features of Muck Boots that many people like (and some don’t like).

Lastly, I find them to be slippery on the ice. I find slip-on ice cleats to be a must when wearing these or any pairs of Mucks when ice fishing. Otherwise, you run the risk of falling, which can be bruising.

Recap of Alternatives to Muck Boots

There are 2 pairs of alternatives that I’ve found that are very similar to Mucks.

The Lacrosse brand of slip-on waterproof boots can be just as good, and in fact, the one pair I own has lasted 3 years thus far (and still going). While the price is about the same overall, the fact that they’ve lasted longer as made them a viable alternative.

Another pair of hunting boots I’ve really enjoyed has been the Danner brand of boots. While they’re not slip-on boots like Mucks, they’re really well constructed. In fact, I’ve got a pair of Danners that are 5 years old and still going strong. They are more expensive, I’ve found, but the fact that they’ve lasted a long time is a huge plus. In other words, you get what you pay for.

I don’t like lacing boots since I’m in and out a lot out of the house. So I use these strictly for hunting and ice fishing…not as much every day like I have the Muck boots. But if you find a model that fits your style, I think you’ll be happy with them.

Finding the right pair of boots can be troublesome I’ve found. It’s not whether or not they really fit, but if they fit your needs for your lifestyle.

I know a lot of guys that swear by their Muck boots and wouldn’t buy anything else. AWESOME, I’m glad they’re finding what works for them. But for me, I think I’m done buying Mucks. The fact that they haven’t lasted long enough is a deal-breaker, and my next pair of boots will probably be another pair of Lacrosse boots (again, I love slip-on boots).

So If I had to rank these boots on a 1 to 10 scale, I’d probably give all 3 models a 5 to 6-star rating overall. They do have their pros and cons like all other boots, but I need to get more out of my daily boots.

Thanks for reading and best of luck with your choice of hunting or fishing boots.